Ladies and gentlemen, welcome to the launching of my Project Cocina de Camilla, a chronicle of my adventures in cooking now that I decided that it’s about time!

For my first try, I wanted something so easy since I still didn’t know if I’d be a complete nitwit about this art or not. Good thing I read Yahoo! News Philippines every morning after checking my Yahoo! Mail at work, so one day I saw a title “How to Make the Perfect Potato Chip“, clicked it, and tadaaa! it became the first in my little project.

I was excited about it ’cause I love potatoes, in fact, I can survive a day just eating french fries! (Errr… If you happen to have read my other food blogs, you might have encountered me saying a lot of times that I love this food and that. Well that’s because I really love food in general. haha). So without further ado, here’s my first try at cooking… 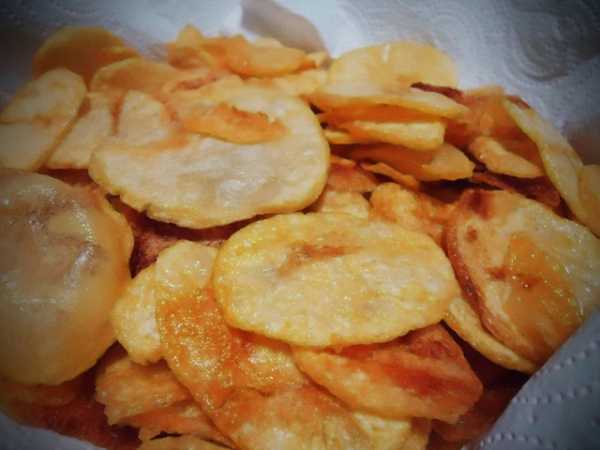 The Essentials and the Expenses

It was my first try, so although I followed the directions to the dot, I made tiny alterations on the essentials. An example is that the article I read said I needed four Russet potatoes, and although I came to know through the Internet that they’re large, rough potatoes, I just asked my mom to buy me a kilo of potatoes from the public market, so I couldn’t be finicky, and besides, I didn’t think there would be any difference if I bought the regular ones.

Anyway, here are the essentials of this project and my expenses:

Essential #1: 1 kilo of potatoes
Price: 60 pesos from the public market 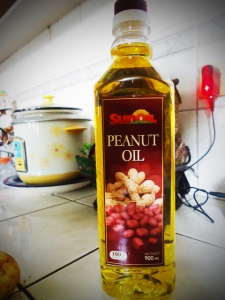 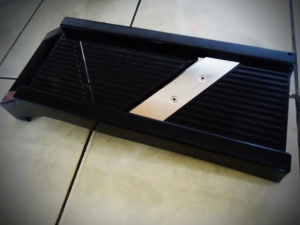 (#3 is optional, I could’ve just used a knife, but then I thought, hey, I love potatoes so I’m sure this isn’t the first and last time I’ll use it, and mom and I can still use it on some other vegetables and fruits. I also imagined the ease it would bring in cutting potatoes into thin slices. So I purchased it. ^_^)

Preparating and Cooking the Potato Chips

Since this is homemade potato chips and its main ingredient is real whole potatoes, making it isn’t as easy as the deep frying we see when we buy french fries outside. For one, they’re not ready-made, and two, they’re chips, so there are certain steps to take to make them crispy.

So as instructed in the article, I cut the potatoes thin to attain that crispiness which made potato chips popular back in the day. I used the mandolin slicer for this but somehow, I couldn’t do the 1/8-of-an-inch thinness ’cause it was too hard. I even cut my right thumb twice because I was still too stupid to figure out that my new equipment comes with a protective holder to use for my safety. Anyway, I still continued hoping that the slices I made, which were immediately tossed in a pot of water to remove the residual sugar, were still okay.

Then the next step is to dry the potatoes out by laying them in kitchen towels and rolling and squeezing them to remove as much water as possible. If you’re wondering what’s this for, it’s because the second best part in potato chips after the potatoes themselves is the oil, so it’s important that each slice absorbs enough of it when being deep fried.

And then there was the deep frying. I did this in two batches because a kilo of potatoes is actually plenty, and a 900ml of peanut oil isn’t enough after all.

Ahh… Wait. So why peanut oil? My mom was a bit surprised about this so she asked me why I bought an expensive oil when we have a canola oil at home. Well, aside from what I said above that I followed the directions to the dot, I read on the web and at the back of the bottle I bought that peanut oil, which is made from raw peanuts, is commonly used in frying because it has a high smoke point of 225 °C (437 °F), and it’s also healthy due the low saturated fat and high polyunsaturated and monounsaturated fat contents. It smells great and so peanut-y, by the way, and it adds flavor to the potato chips.

Anyway, back to deep frying. My home doesn’t have a kitchen thermometer so even if the article said that the potato slices should be put in the pot at 200 degrees and then slowly heat up to the frying temperature of 350 degrees, I simply estimated this part by assuming 200 degrees is the middle size of the flame on the gas stove, while the 350 degrees is the largest. I guess our stove can’t be heated too much, though. The article said the potatoes would reach golden brown at 3-4 minutes, but according to my timer, it was already 16 minutes when mine got to the said color. Well, either that, or my slices were indeed thicker than advised.

When my chips were cooked, I removed them from the pot and placed them in a strainer first before finally putting them in a container lined with kitchen towels around. As I write this part, I started wondering why I had to use the strainer when I could toss the chips directly to the bowl. haha. Next time, next time… XD

The Yahoo! article also gave the ingredients and how-to’s of the seasonings, barbecue and sour cream and onion, but I just used iodized salt because the peanut oil’s rich taste on the chips was already enough as a flavor. My family liked it, so was I, though my brother opined that some, those with bigger slices, tasted like cassava chips (Read: First try). Our favorite ones were those smaller and thinner slices which were a result of my inexperience in the use of a mandolin slicer and cutting stuff itself. Because of that, I already have a plan on what kind of slice I’ll do on my next try with potato chips, but it’s a secret for now. hehe

P.S. I spent 954 pesos and more than two hours of my life for this project when I can simply buy a bag or two of chips for less than 100 pesos, open it, and happily gorge it. What a waste of time and money, you can say out loud. But, hey, at least with this homemade potato chips that I personally made, I can be sure that there aren’t any unnecessary ingredients on it like MSG and stuff, only potatoes and oil–I’m not saying that deep frying is healthy, but still, there isn’t any other way to make chips but to fry them, right? Moreover, I learned how to do it. There’s a big difference between knowing how something came to be and not knowing at all. So when the world ran out of our favorite chips, at least I can make myself some as I please and as long as there are potatoes and oils around. 😉

Words of Happinest is…

Be your own light in the darkness. :)

Good morning, silver! Rise and shine! Start the year right (No, not exactly with vanity. Haha), make it count, and end it with more smiles and laughs to offer the world! :3 #silver #25thbirthday #goal #optimism #anticipation

Words of Happinest is a proud member of…

Words, thoughts, and feelings, out of the mind

"Faith is to believe what you do not see, and the reward of this faith is to see what you believed." - St. Augustine

i'll reach for the skies when i find my arms

Food, Travel and a bit of everything