Amid the people crowding and drooling over big and technologically advanced cellular phones from giant companies, my friend and I showcased our uniqueness and went for the small and cute, yet surprisingly capable one from a starting local firm. 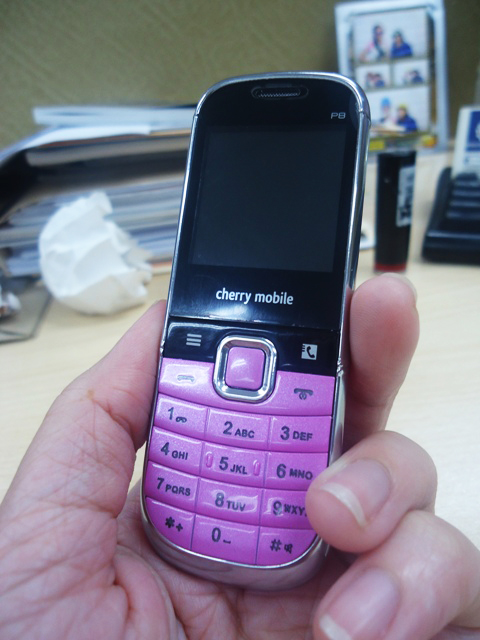 It all started when my friend-slash-officemate came to my place at work and excitedly told me about a cute phone she saw the other day that she thought would match our unique taste. It was the Cherry Mobile P9 and we searched for it on the Internet and it really was cute and totally inexpensive. We promised each other we would buy one each as part of the signs of our friendship, but on our next pay day because it wasn’t part of our budget as of then.

Then came weekend and we went to one of her cousin’s home and saw her niece’s phone which looked like the one we ought to buy soon. We borrowed it, placed it on our palms and got impressed with its size, then checked its features out, and since then we couldn’t get it off our minds.

So when Monday arrived, we looked for the phone in Eastwood during office lunch break, then SM Megamall after work. It was quite a frustrating hunt, with every store had it out of stock, until we saw the Cherry Mobile booth in SM Megamall’s Cyberzone, and then YES! We saw our perfect phone! Not the P9, though, but P8 which is actually better. P9 looks like a calculator, while P8’s like a toy but really, really cute and more of an eye candy.

Cherry Mobile’s P8 is a tiny gadget packed with goodies. At the price of 1,199 pesos, you get a dual SIM phone that is also MMS, WAP, and GPRS capable. Then though its colored LCD is only 1.44 inches, its user can still view photos taken from its 1.3 MP camera and if one wants to, can transfer them to a computer since P8 also has a Micro SD slot that can accommodate up to 4GB! And the camera has options for: photo size, night mode, brightness, contrast, exposure, white balance, and effect. Nice, huh?

Not only those, who would’ve thought that such a small phone has Bluetooth, FM radio, can play audio and video, and even record voice and video? Almost everyone I showed it to in the office find it really impressive and one even already bought her own.

And with all the dangers on the streets expensive phones bring their owners, Cherry Mobile P8 offers no risk at all. I can wave mine freely everywhere without any fear that some bad guy or two would take it away from me. I’m too confident about this since I don’t think snatchers would sell their souls to the devil for such a price. hehe.

Now there’s a downside to everything. Due to its size, this phone is not advisable to people with big thumbs ’cause they’ll surely have a hard time with it. And the keypad isn’t QWERTY, which means if you are to type letter O, for instance, you will have to click, click, click on key 6 first to get it, then click, click on key 9 for letter X.

When it comes to sounds, P8 is quite decent until you listen to music through its earphones–Errr… That is if you have ears like mine, that which is sensitive when it comes to what has good quality and what hasn’t. But if your ears aren’t, I guess it wouldn’t be a bother.

And if you’re into applications, obviously this isn’t for you. In fact, I think I have decided to make this my phone because I have an Apple iPod Touch, and only the SMS-sending capability is missing in it, so P8 is the perfect fit for that gap.

If you don’t mind the few negatives, you can definitely go for this phone and I recommend it. 🙂

Established in 2009, Cherry Mobile is fairly new to the local IT business but it already managed to snag the IT Company of the Year award at the 2010 CyberPress Awards.

My friend and I with our Cherry Mobile P8. (Photo grabbed from Boss Deth Alegre)

What can you say about this post? :) Cancel reply

Words of Happinest is…

Be your own light in the darkness. :)

Good morning, silver! Rise and shine! Start the year right (No, not exactly with vanity. Haha), make it count, and end it with more smiles and laughs to offer the world! :3 #silver #25thbirthday #goal #optimism #anticipation

Words of Happinest is a proud member of…

Words, thoughts, and feelings, out of the mind

"Faith is to believe what you do not see, and the reward of this faith is to see what you believed." - St. Augustine

i'll reach for the skies when i find my arms

Food, Travel and a bit of everything